skip to main | skip to sidebar

Finally A Sports League Has Embraced the Net

As far as I know the NHL is now the first sports league to have games available in full for FREE online. The NHL has partnered with Google Video, who will host the videos. The games will be delayed, posted one to two days later, but the partnership will also have classic games also available. For instance, you can now watch the 1967 Stanley Cup Final between Montreal Canadians and Toronto Maple Leafs, game 5 of the 1991 Western Conference Finals between the Minnesota Northstars and the Edmonton Oilers, or the 1974 Stanley Cup Finals between the Boston Bruins and the Philadelphia Flyers.

For myself, as an avid hockey fan, I can now watch Buffalo Sabres games that aren't on Versus (6 games), NBC (1 game), or the CBC (9 games). I can also watch the Chicago Blackhawks now also; I must admit I am quite excited about this not only for myself but for the NHL also. Due to the NHL strike of '04-'05 season, the '05-'06 season saw a lack of television broadcast in the States, and attendence. So with that said anything the NHL can do to boast television coverage, game attendence, and awareness of the sport in the U.S. in particular would be welcome amongst NHL executives, team shareholders, players, and the fans. I can not see this move with Google having any negative effect for the NHL, its teams, and its fans.

As I watched the MLS Cup Final in Frisco, Texas on ESPN between the Houston Dynamo and the New England Revolution the attendence was at 22,427. This is more than some NFL, MLB, and NBA games, and to think that some people believe that soccer could never succeed in the United States. Soccer is alive and well in the States and can only grow. But like hockey soccer does not have the television broadcast reach like the other major sports leagues. This is where putting your leagues matches free and in full online can truly help you. The reach of the NHL, MLS, and the US Rugby Super League would spread 100 fold if only these leagues can pull their heads out of their ass and embrace the online world. The NHL has done it and I can only hope that the other sports leagues will follow. Hell if we can get them all to do this, the next step is the ability to watch them live from your computer for free.

I have just recently come across a fantastic show called Metalocalypse on Adult Swim. This is a fantastic show created by Brendon Small and Tommy Blacha (the creator of Da Ali G Show) featuring great death metal in a Scandinavian vein. What is even more fantastic is that the fictional band that the show is based on, Dethklok, has their own myspace page with 3 songs available for download. You can

listen to a great interview with Brendon Small on the Sound of Young America Podcast. 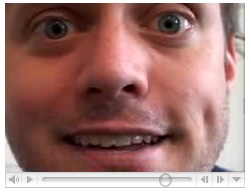 Started as a simple video blog, ZeFrank.com has grown to cult like status. His viewers admire his commentary on life and the absurdity of our society so much that they actually manage a wikipedia page that gives a transcript of the show; word-for-word.

Instead of just being a simple blog, ZeFrank has created a forum in which his viewers participate in such projects as making an earth sandwich, a contest on who has the most ugly Myspace account, and a chess match.

His video blogs are only a few minutes long, but they are jam packed with inside jokes, witty songs, political commentary, and “jokes for nerds.” After watching your first show, you will find yourself addicted and make viewing his show a part of your daily routine.

Jason discovered this game about a week ago called Space Federation Galactic Conquest, and we have been playing it way to much since then. It is free, and there is nothing to download, so at least you won't lose anything by buying a shitty fucking first person shooter that every reviewer says is "amazing".

Hey if you do decide to play it join my federation called LawnGnomeDeathMarch.

Unless otherwise noted, the articles on this web site are licensed under a Creative Commons Attribution-Noncommercial-No Derivative Works 2.5 License.